Professor Brian Setchell Medal has a long-standing interest in the physiology, biochemistry and endocrinology of the testes and epididymis with particular reference to the blood-testes barrier, testicular fluids and blood flow, the descent of the testis, cryptorchidism and the effects of motility, fertilising ability, and the development of embryos in normal females made pregnancy by males whose testes had been heated.

Until the end of 1996, he was Professor of Animal Sciences in the Faculty of Agricultural and Natural Resource Sciences at eh Waite Campus and spent 1997-8 as a Nobel Foundation Fellow and 2000 as a STINT fellow at the Paediatric Endocrinology Unit, Karolinska Hospital, Stockholm, Sweden. He has published a book ‘The Mammalian Testis’, and 69 major reviews and chapters in books, 136 original research articles, and 203 abstracts on the work of his group on the testis and epididymis, as well as translations of de Graaf’s two books on Male and Female Reproductive Organs (originally published in 1668 and 1672 respectively) as well as Sertoli’s original 1865 article describing the cells in the testes named after him. He was given the Distinguished Andrologist award for 1997 by the American Society of Andrology.

In 2019, the recipients of this prestigious award were Professor Sheena Lewis and Dr David Miller.

From 2020 onwards, the award will continue to be awarded as part of the Association of Reproductive and Clinical Scientists (ARCS).
Congratulations to both Sheena and David! 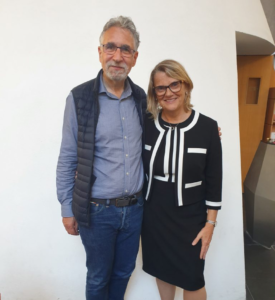 Sheena Lewis began her research career in muscle physiology at Queen’s University, Belfast but it was not until she read ‘A Matter of Life’ by Robert Edwards and Patrick Steptoe, that she became inspired by reproductive physiology.  Her career path changed direction and she began to investigate the endocrine, cellular and molecular reproductive dysfunctions in infertile men and to develop novel prognostic tests to enhance assisted conception success. Her research focussed on specific lifestyle (recreational drugs and diet) and disease factors (such as diabetes) that can impair male infertility. Sheena had a particular interest in the role of sperm DNA damage in male infertility, pioneering innovative diagnostic tests for sperm DNA fragmentation. In March 2010, she launched her own commercial company to provide the SpermComet™  test for clinical diagnostic purposes.   From 2012 to 2015, Sheena was co-investigator of one of 7 international centres in REPRO-TRAIN (Reproductive Biology Early Research Training), a Marie Curie Initial Training Network funded by the European Commission under the 7th Framework Programme (FP7-PEOPLE-2011-ITN, PITN-GA-289880). She was also a co-investigator on the multicentred, randomized control HABSelect trial:  a new sperm selection process for ICSI (Intracytoplasmic Sperm Injection) aimed at increasing live birth outcomes and reducing miscarriage rates.

Her research and innovation have been instrumental in generating awareness of the role of sperm DNA damage in pregnancy and recurrent miscarriage, which has been invaluable in understanding the contribution of the sperm to these events.  In 2003, she was awarded a personal chair in Reproductive Medicine and Honorary Consultant in recognition of her contribution to the field.

Sheena has taken a very active role in a variety of professional organisations, promoting the field of Andrology.  She was Chair of the British Andrology Society, UK national representative and past Chair of the Andrology special interest group of the European Society of Human Reproduction and Embryology, past executive member of the British Fertility Society and a founder member and past Vice Chair of the Irish Fertility Society. She also served on the Scientific Advisory Committee at the Australian Research Council Centre of Excellence in Biotechnology and Development (Newcastle, NSW, Australia). She is a member of the Human Fertility and Embryology Authority’s Scientific and Clinical Advances Advisory Committee

She has published extensively in the field of male infertility and is the author of more than 100 papers, reviews and book chapters. She is also on the Editorial Boards of Reproductive BioMedicine Online, Systems Biology in Reproductive Medicine and Life in vitro (USA) and associate editor of Basic & Clinical Andrology (BACA).

Sheena is committed to raising the profile of research and ethical issues relating to assisted reproductive medicine and contributes to current debate on international TV, radio and online interviews.

He developed his interest in Andrology at Liverpool John Moores University where he was appointed senior lecturer in biochemistry. David is passionate about understanding the molecular basis for male infertility, an area of clinical medicine that we know relatively little about. His early work involved the study of heat shock proteins in the brine shrimp Artermia salina and their ability to protect cells against environmental stress. His current research focusses on DNA and RNA packaging in ejaculated sperm, with the aim of identifying gene expression pathways that are affected in the infertile male. Sperm specific RNAs that are delivered to the egg can be identified and their influence on the developing embryo assessed.

David has also spent much time investigating chromatin packaging in sperm. His novel studies demonstrate how specific stretches of DNA in sperm chromatin, containing particular gene sequences may be more susceptible to intrinsic or externally regulated damage, leading to sperm dysfunction, which in turn may have important implications for male infertility.

More recently, David was the chief investigator for the multicentre randomised controlled, blinded trial to determine the efficacy of sperm selection by prior hyaluronic acid binding for Assisted Reproductive Treatment:– multicentre (HabSelect).  Hyaluronan selected sperm may have better genomic integrity, including lower levels of DNA fragmentation, chromosomal aneuploidy and cytoplasmic retention. This pivotal trial and subsequent studies demonstrated that although the improvement in live births remains equivocal, sperm DNA integrity is integral to the chances of successful treatment and that sperm selection with hyaluronan can eliminate almost 40% of miscarriages among older women. This result is of considerable value in terms of our understanding of the possible causes of unexplained recurrent miscarriage.

Throughout his career, David has been an inspirational teacher, sharing his enthusiasm for Andrology with his students and promoting interest in the field.  His teaching focuses on spermatogenesis and infertility, as well as sex determination and differentiation, maternal serum screening in prenatal diagnosis and the molecular genetics of early development. He has contributed to the residential and distance learning Masters’ programmes in Clinical Embryology at the University of Leeds and has also been very much involved in the PhD programme, providing research opportunities to students from both the UK and around the world.

David was closely involved with the REPROTRAIN International Training Network, coordinated by Rafael Oliva in Barcelona with three projects based in Leeds. Two projects provided training for Early Stage Researchers to undertake research in the composition and packaging of human and bovine sperm chromatin. A third post for a more experienced researcher explored the use of seminal plasma as a surrogate for assessing prostate health (ranging postatic intra-epithelian neoplasmia or PIN to full Gleason 7 prostate cancer). An RNA-based diagnostic is being developed for this purpose.

David has been a very active member of the Society for Reproduction and Fertility as well as the British Andrology Society serving on their committees for many years. He has published extensively in the field of sperm molecular biology and male infertility.

Previous recipients of the Brian Setchell Medal are: