Posted in: ,Links outside ARCS

The MMed Sci in Assisted Reproductive Technologies at the University of Nottingham was the first and one of the most successful Masters level courses in the UK, so as one of its many former lecturers, it was with some sadness and disappointment that I heard that it was to close this year. Started by Simon Fishel and Steve Fleming in the early 1990s, the MMedSci in ART was a breeding ground for embryologists and other professionals in reproductive medicine for the UK and many other countries in Europe, Asia, the Middle East and Africa. At a time when teaching and allowing individuals to develop technical skills using human cells, tissues and bodily fluids was becoming increasingly challenging in terms of ethics, regulations and health and safety, the course managed to find the right blend of practicals using human and animal models to complement the core lecture content. Here’s what people who knew about it said:

“I truly believe it was the greatest contribution that Simon and I made to the future of ART – so many outstanding students went on to achieve far more than he or I could have done alone. It would be unfair to others to single out individual examples but you only have to look at the major societies in human embryology and IVF around the world and our graduates are often to be found in key leading roles, with a vast collective track record of publication” Steve Fleming

According to Dr Walid Malouf, himself a former graduate who went on to be principal lecturer in embryology, until September 2021, almost 500 scientists have graduated and more than 250 will have made it into the world of IVF and reproductive medicine, with 20% now working at Director level. Walid also expressed his sadness at the course closing, adding “it was a privilege to lead and grow the ART course further in its last few years and a fantastic calibre of students graduated since the course conception are now laboratory or clinic directors, active clinical scientists or clinicians, as well as a number who chaired or are currently chairing different international societies in the area of reproductive medicine”. Walid is now part of the international Vitrolife team working with Embryoscope.

“I truly believe it was the greatest contribution that Simon and I made to the future of ART – so many outstanding students went on to achieve far more than he or I could have done alone. It would be unfair to others to single out individual examples but you only have to look at the major societies in human embryology and IVF around the world and our graduates are often to be found in key leading roles, with a vast collective track record of publication” Steve Fleming

Jane Blower, lead scientist and PR at Leicester Royal Infirmary was in the first cohort in 1992, and the first UK student to be awarded distinction. “I’m really sorry to hear the course is stopping – it must have produced some top class embryologists/researchers. It was such a valuable learning experience with top class speakers and invited guests and was a world renowned course. For me one of the highlights was studying at the Sutton Bonnington Campus with access to its first class hands-on facilities”. Jane recently spent a significant time as deputy to the Chief Healthcare Scientist, and is going to be the new president of ARCS.

Another early graduate was Alison Campbell who is Director of Embryology for the CARE group, the UK’s largest IVF provider. “It was so sad to hear that the Nottingham University M.Med.Sci in ART had ended. I graduated from the course in 1995 and my perception of it at the time, and ever since, was that it was world class and thriving. It is a strange coincidence that I have recently been involved in establishing a Masters degree course in Clinical Embryology with another university (Liverpool John Moore’s) with Prof Simon Fishel who set up the Nottingham course many years ago. The first student intake will be September 2022. It’s a wonderful field which is rapidly evolving so I hope to be able to share the knowledge I hold from my days at Nottingham University to future generations of reproductive scientists and clinicians.

Alison Campbell and Steve Fleming with other MMedSci students in 1995 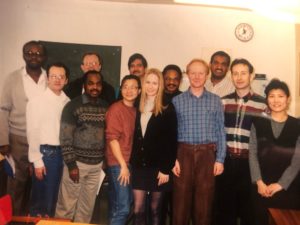 Dr David Morroll worked for NURTURE between 1997 and 2002, running both the IVF and andrology aspects of the course. “The Nottingham Masters was unique and provided its students with both a thorough understanding of the science and a sound introduction to the core skills needed for assisted conception”.  Dave was also part of the BAS (British Andrology Society) education group that ran residential courses in semen analysis, so he was able to develop the Masters andrology module along the same lines. It was in helping him with others from the BAS that provided me with a platform to further develop the andrology from 2005 onwards and then from there provide external workshops in basic semen analysis, sperm preparation and cryopreservation. 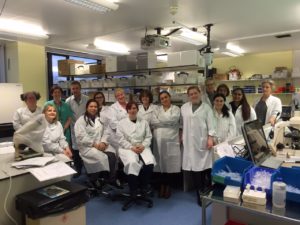 Dave added “In my time at NURTURE, I was part of the course management team and was privileged to work with many talented students from across the world.  It is very rewarding to see these students go on to forge very successful careers in embryology.  Indeed, for a time, it felt like the course was the unofficial training programme for most UK embryologists! On a personal level, it was saddening to hear that the M.Med.Sci in ART was being discontinued.”  Dave currently works for Cooper Surgical, one of the world’s largest suppliers of IVF equipment and consumables as Director of clinical support “

Mr Kanna Jayaprakasan, Consultant lead for Fertility at Royal Derby Hospital commented “the ART masters course has been excellent and attracted scientists and clinicians worldwide with its high quality syllabus, delivered by the experienced faculty of the University of Nottingham. It is very unfortunate to see that such a great course with excellent track record was stopped so abruptly”.  Dr Jay was a regular guest lecturer providing much of the clinical background over the past 10 years or so. With his expertise in reproductive ultrasound he was able to provide some of the more clinical students with some excellent research projects.

All in all, the MMed Sci has been a huge success, and over years provided much of the UK’s (as well as many other countries) senior workforce in reproductive science. On a personal note, although my role was more in an honorary position with my main day job in the NHS, it has been a pleasure to watch so many graduates take up positions in clinics up and down the country and then bump into them at fertility conferences. Rightly or wrongly I still see them as students and can never remember which year they were with us, yet quite often they are now in senior positions. Both myself and colleagues can certainly take some satisfaction from the small contribution we have made to a significant number of successful careers. What University politics or set of circumstances conspired against us mere teachers to bring proceedings to a close, we may never know.  In the last 2-3 years the course was full with 30 students, and with a new Masters course in Clinical Embryology being launched in Liverpool soon, there is certainly the need and demand. Whether COVID accelerated or was responsible for the demise is uncertain, but the course will be missed by many.